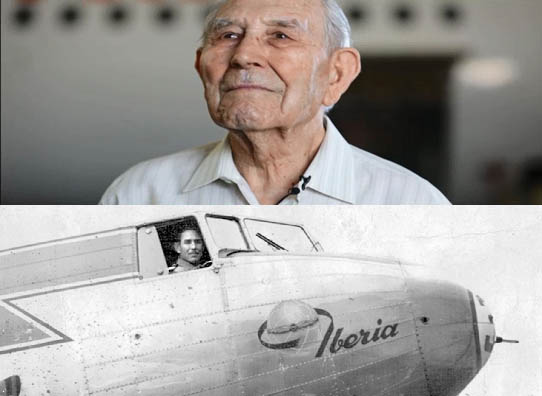 “Hello. My name is Engraciano González Barroso. A few days ago I had my 104th birthday. It’s hard to believe, but I have spent more time retired –41 years and counting– than I did working for Iberia –38 years.

I remember my time at Iberia very fondly, and I have so many happy memories. I still have the ID card the company issued me the day I joined, 20 December, 1940. I entered as a master mechanic, employee number 330 in the company.

A few days after I started work they gave me an assignment that ended up being one of the most interesting journeys of my life –to take a Dragon Rapide to Gran Canaria in the Canary Islands. We left on 9 January, 1941. I was in charge of the engines and with Captain Luis Lerdo de Tejada was at the controls. We first landed in Seville, and then flew on to the Spanish Protectorate of Morocco to refuel. We were careful to avoid the French sector, because WWII was on and they could have shot us down.

Our only way to navigate in that period was with maps, following roads and rivers to keep from getting lost. It was quite an adventure, and it took us more than 10 days to reach our destination in the islands.

I stayed in the Canaries for three years, working in the Gando airport. In that time I married my childhood sweetheart and we had our first child.

After that I worked in Madrid until my retirement as chief of line maintenance technicians. I started with the twin-engine Douglas DC-2 and the three-engine Junker JU-52. And I helped refit a Junker with extra fuel tanks for flying across the Atlantic.

Other aircraft I worked on included the  Douglas DC-4, the L-1049 Super Constellation, and the Bristol-170. The last ones I remember working on were the Douglas DC-9 and the Boeing727.

I have an infinite number of stories about my time in Madrid. One of my favourites is about when in the wee hours a plane from another airline came in with a fault in the transmission system. There was no replacement for the broken part, so I made a copy with a lathe and grinding wheel. When the aircraft was repaired, the pilot thanked me for my work, and I told him that some of my staff were much better than I on the lathe and they would have done it better and faster.

I also remember what hard work it was to change the tyres on the landing gear, and I devised a lever mechanism that made it much easier.

I enjoyed my work a lot, and I remember how hard it was to retire. Luckily, with my wife I soon discovered two new passions: travel and dancing.

I’ve visited Iberia several times in recent years. When I turned 100 they gave me a tour of the maintenance hangar where I used to work, and I met the people who are now doing my old job. I was dazzled by the improvements to the installations and how the technology has advanced since I retired.

With a little luck I might be able to celebrate my beloved Iberia’s 100th birthday in 2027!”