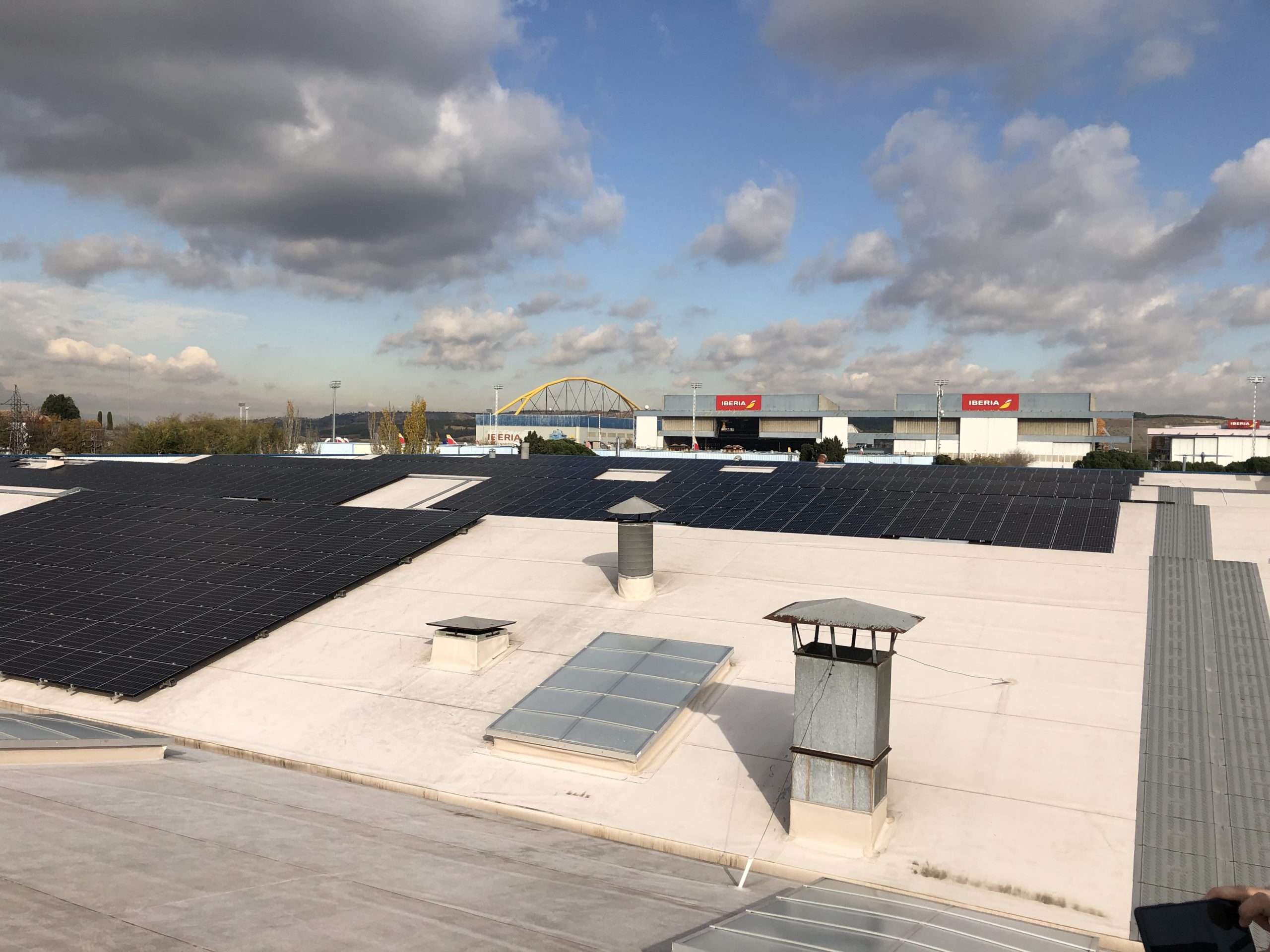 Part of an ambitious plan to reach generation capacity of 10MW in next three years, producing more than 13 million kW/h –enough to supply more than 4,000 homes.

Iberia and the energy transition specialist Getting Greener have commissioned Spain’s largest corporate solar plant, to supply the airline’s energy needs at Madrid airport, which will produce 80 million kW/h of power, enough to power 800 homes.

The first of a series of projected solar plants to be built at the airport, it is installed on the roof of Iberia’s 10,000 sq. m engine maintenance hangar, and will generate some 2.7 million kW/h per year, avoiding the emissions of 32,000 tonnes of CO2 during its working life.

It consists of 5,650 340Wp solar panels, 14 inverters, 6 km of aluminium pipe, 11 km of aluminium and steel structural pipe, 2,000 anchor points, and more than 25 km of electrical wiring, plus a remote real-time monitoring system that displays information to employees and visitors.

The commissioning of this photovoltaic plant is the first step in a programme in which Iberia and Getting Greener are revolutionising energy efficiency at the airline’s Madrid airport hangars, workshops, and offices. The 12-million euro cost will quickly be recovered by savings on current energy expenditures.

The programme is intended to reach 10 million MW of generation capacity within three years, with a total solar panel surface of 50,000 sq. m and output of more than 13 million kW/h, equivalent to the power 2 / 2 consumed by more than 4,000 homes.

Iberia and Getting Greener are now at work on the second phase, which consists of installing a solar plant on the roof of MRO Hangar 6 and adjoining workshops. adding another 15,000 sq. m of solar capture surface, to generate a total of 14 million kW/h. This second 3MW plant will generate more than 4 million kWh, enough to supply the needs of 1,200 homes.

To reduce the airline’s carbon footprint still further, the Iberia-Getting Greener programme also calls for the substitution of energy-guzzling equipment at the airline’s Madrid airport installations. This includes air conditioning and lighting systems.

Iberia’s IAG parent company was the first airline group to commit to net zero CO2 emission by 2050. To reach this goal, Iberia is focusing on more fuel-efficient aircraft, the development of clean aviation fuels, digitisation of all services, the use of electric ground vehicles, improved waste management, the gradual elimination of plastics in aircraft, and greater energy efficiency in all company operations.