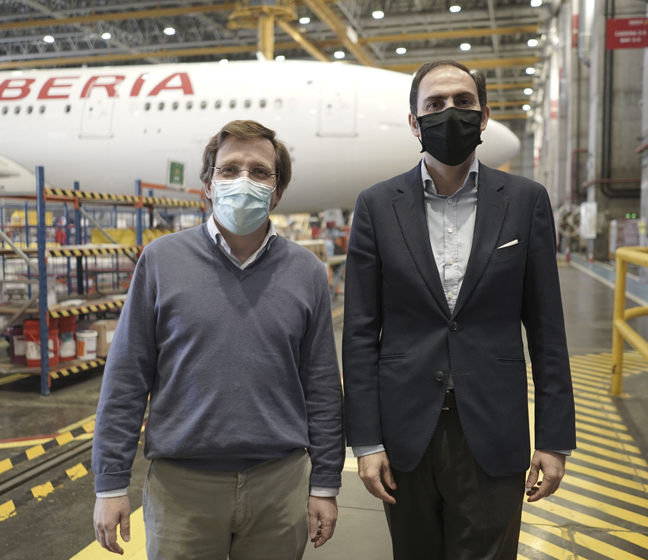 The aim is to convert its aircraft maintenance installations into the leading Southern European example of sustainability, innovation, and training.

Madrid Mayor José Luis Martínez-Almeida was the honoured guest at Iberia’s presentation of its project to convert its maintenance installations into a reference point for aircraft maintenance and allied activities in Southern Europe.

Iberia decision to develop this project is intended to:

The project involves the re industrialisation of the 1.7 million sq.m La Muñoza site, of which Iberia now dedicates some 220.000 sq.m principally to aircraft maintenance. It is linked directly to the airport by the A2 and M50 motorways.

Mayor José Luis Martínez-Almeida said: “Today we learned about Iberia’s bet on the future, be means of the conversion of the La Muñoza maintenance installations into a major technological hub for the aviation industry. In this effort they will have the full support of the Madrid Council to enhance the city’s importance in this industry.”

Begoña Villacís, Deputy Mayor of Madrid, said: «The Madrid City Council is working on the reorganization of the more than 1.4M m2, which will become the largest aeronautical cluster in southern Europe, attracting innovation to our city and generating qualified employment with high added value».

Iberia’s Executive Chairman Javier Sánchez-Prieto said: “The aviation business in one of the most competitive in Spain and this project in our installations adjoining the Madrid Airport supplies new impulse to the aircraft engine maintenance business, the development of sustainable energy sources, and aeronautical training.»

Today all the electric power consumed on the site comes from 100% renewable sources. In coming months the airline group will begin to install solar panels on the roof of its engine workshop which will generate 80 million KWh.

This solar installation will reduce current CO2 emissions by 1,053,000 kg per year, or 32,000 tonnes during its working lifetime. This is the equivalent of the power consumed by more than 800 homes.

Mayor Martínez-Almeida visited the engine workshop where the panels will be installed, where he also saw the engine-testing benches, Hangar 6, and the simulators operated by CAE, Iberia’s main supplier of simulator training services, which has 16 cockpit simulators for pilot training, as well as cabin simulators for training cabin crews. Together they provide training for some 20,000 people each year.